I often get emails asking me to comment in detail on an article on global warming that pretends the “problem” is worse than it is. Here is my reply to one such request.

Earth is a wilder [no], warmer [no] place since last climate deal made in 1997

PARIS (AP) — This time, it’s a hotter [Satellites show no global warming for the 223 months (i.e., 18 years 7 months) since April 1997], waterier [Water vapour is difficult to measure, but some records show no change in water vapour except in the vital mid-troposphere, where it has actually declined], wilder Earth [The IPCC, both in its 2012 Special Report on Extreme Weather and in its 2013 Fourth Assessment Report, says there has been no particular overall trend in storminess…

Afternoons in Texas used to be much hotter prior to 1960. You can see why fraudsters like Katharine Hayhoe and Heidi Cullen start their graphs at the 1970s.

This didn’t fit the government agenda, so NCDC simply changed the data to show warming

This was accomplished through a spectacular hockey stick of data tampering which would make Enron accountants blush.

Criminals working for the White House predict a huge increase in the number of 100 degree days in Texas.

In reality, the frequency of 100 degree days in Texas has nearly dropped in half over the past century.

This massive climate fraud being perpetrated by the US government is straight out of Orwell.

The lastest issue of Nature Climate Change to reach my mailbox has some startling news, particularly considering that it comes from a generally Warmist publication. One might say is is “topsy-turvy” (upside down) from a Warmist viewpoint, but quite in keeping with a Skeptic point of view.

1) Total emissions from biodiesel are WORSE than emissions from fossil fuels, when considering both Direct and ILUC (Indirect Land Use Changes) Emissions.
2) Natural gas is WORSE than that “filthy fuel” coal when considering the net warming effects due to leakage rates of methane associated with natural gas and the cooling effects associated with aerosols from burning of coal.
3) Pure electric vehicles are WORSE than petroleum-burning hybrids, considering overall lifetime cost/benefits.

Here are some of the details:

So, exactly how long has it been warming? 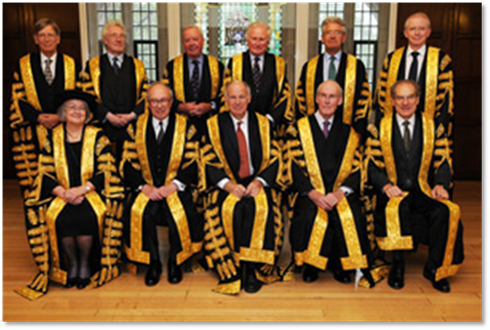 On September 17, 2015, the UK Supreme Court held a climate-change propaganda event in its no. 1 and no. 2 courtrooms, in which only one side of the debate was permitted. Lord Carnwath, chairman of the event and a justice of the court, said:

“President Obama has said we are the first generation to feel the impact of climate change and the last generation that can do something about it. On that basis, the forthcoming Paris negotiations under the UN Climate Change Convention are a crucial test of our ability as a global community to address those challenges. The intention is that the commitments which emerge from those negotiations should have legal force.”

Worse, Philippe Sands QC, the court’s chosen lecturer, having regurgitated numerous IPCC talking-points without questioning the veracity of any of them, expressed outrageous prejudice against scientifically-qualified skeptics when he said:

Nic Lewis and Judith Curry just published a blockbuster paper that pegs the earth’s equilibrium climate sensitivity—how much the earth’s average surface temperature is expected to rise in association with a doubling of the atmosphere’s carbon dioxide concentration—at 1.64°C (1.05°C to 4.05°C, 90% range), a value that is nearly half of the number underpinning all of President Obama’s executive actions under his Climate Action Plan.This finding will not stop the President and the EPA from imposing more limits on greenhouse-gas emissions from fossil fuels. A wealth of similar findings have appeared in the scientific literature beginning in 2011 (see below) and they, too, have failed to dissuade him from his legacy mission.

The publication of the Lewis and Curry paper, along with another by Ragnhild Skeie and colleagues, brings the number of recent low-sensitivity climate publications to 14, by 42 authors… Collapsing Greenland glacier could raise sea levels by half a metre, say scientists | Environment | The Guardian

Only problem is, NASA satellite photos show that the glacier is growing, not shrinking

The other large glaciers of northern Greenland are also growing.

In 1939, scientists also said that this glacier was collapsing, along with all the other glaciers in Eastern Greenland, and Norway.

Even if the glacier was melting at the rate they claim (4.5 billion tons per year) that would raise sea level only about half an inch over the next century, not half a metre.

The level of fraud on display from NASA ahead of Paris is off scale.

In the aftermath of the horrific events in Paris, you would think some politicians might have been jolted into reconnecting with reality, regarding the relative dangers posed by climate change vs terrorism. But a few politicians seem to be clinging to the ridiculous view, that climate change is somehow more of a threat, than well organised homicidal maniacs.

At Saturday night’s second Democratic presidential debate, just a day after ISIS launched horrific coordinated terrorist attacks in Paris, moderator and Slate political columnist John Dickerson asked Bernie Sanders a straightforward question: “Sen. Sanders, you said you want to rid the planet of ISIS. In the previous debate you said the greatest threat to national security was climate change. Do you still believe that?”

I agree. Here are the climate biomes: Someone please show me where the climate has changed one into another. http://www.blueplanetbiomes.org/world_biomes.htm

Fifty years ago, The Chicago Tribune pointed out that belief in climate change is driven by faulty memory. November 3, 1963 – Climate Is Still the Same; Memories Are to Blame | Chicago Tribune Archive

New York State is investigating Exxon for telling the truth about CO2 in 1976, but the big story is that NASA and NCAR have known since 1971 that CO2 is not dangerous – yet have lied to the public about this for over 30 years.

In 1971, the top climatologists at NCAR and NASA reported that a runaway greenhouse effect is not possible, because the CO2 absorption spectra is nearly saturated already. But it is worse than it seems. Scientists have actually known for 115 years that CO2 is not dangerous.

Knut Ångström, asked an assistant to measure the passage of infrared radiation through a tube filled with carbon dioxide. The assistant (“Herr J. Koch,” otherwise unrecorded in history) put in rather less of the gas in total…