The media is full of stories about 2015 being the hottest year ever.

Tweeter Tom Nelson found out that’s a farce!  He tweeted:

along with these two images showing the stated temps of 2015….and those from the NOAA archive of 1997…. 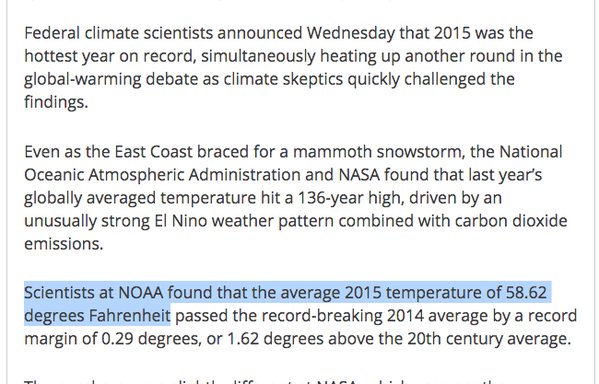 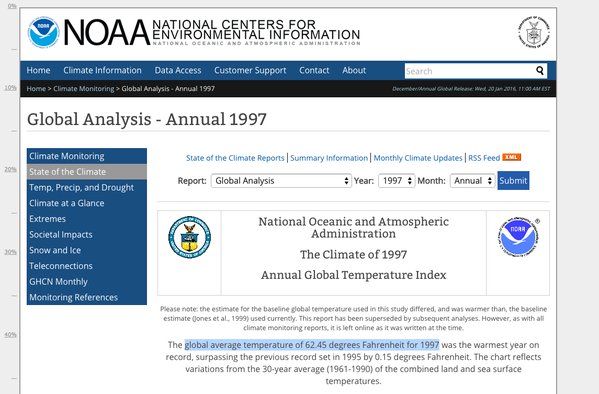 Climate change is not about a single year, but about a pattern of climate over years and decades. Here’s what Norm had to say on the topic:

The issue is called “climate change” and climate is the long term weather so whether or not 2015 was the warmest year is irrelevant to claims of catastrophic global warming being caused by CO2 emissions. El Niño conditions occurred in 1998, 2010 and 2015…

From the “fresh melt water will disrupt the planet” department, except that this ongoing alarm has already been debunked by NASA, see: NASA refutes Mann and Rahmstorf – Finds Atlantic ‘Conveyor Belt’ Not Slowing

TAMPA, Fla. (Jan. 22, 2016) – Scientists from the University of South Florida, along with colleagues in Canada and the Netherlands, have determined that the influx of fresh water from the Greenland ice sheet is “freshening” the North Atlantic Ocean and could disrupt the Atlantic Meridional…

The Wind Industry: happily destroying neighbours’
ability to sleep under its own ‘rules’ since 1995.

In our timeline post – Three Decades of Wind Industry Deception: A Chronology of a Global Conspiracy of Silence and Subterfuge – we covered the fact that – from 1995 – the wind industry drew together a hand-picked team with a mission to write noise rules with absolutely no relevance to wind turbine noise; and, therefore, of no benefit to wind farm neighbours (with predictable and soul-destroying results). Here’s an extract from it:

Starting in the early 1980s, a decade’s worth of research was undertaken by NASA into a series of large wind turbines (then being developed by NASA), which included a stellar cast of physicists, meteorologists, geophysicists, seismologists, engineers (both mechanical and acoustic), and psycho-acousticians. Part of that research involved a multidisciplinary effort to identify the causes of complaints made…