Imagine that.
I’ve said it before and I’ll say it again: climate alarmists need an education in basic climate. There is great variability from year to year – and the Arctic is different because the ice is all floating. It gets blown around and is probably more likely to breaking up, but it will refreeze every winter w/o fail.

Sea ice off the southern Labrador coast hasn’t been this high for this date in 20 years: that’s great news for the harp and hooded seals that will give birth at the Front in another few weeks – for a while anyway, because a bumper crop of baby seals is also good news for the polar bears who gather there to eat them.

So brutal, but true. The polar bear must gorge over the short Arctic spring and early summer to survive the rest of the year.

Sea ice coverage off Southern Labrador for the week of 19 February (the latest date available) 1969-2016, is the highest since 1996; courtesy the Canadian Ice Service:

Sea ice coverage off Newfoundland for the week of 19 February 1969-2016, shows amounts just below average: 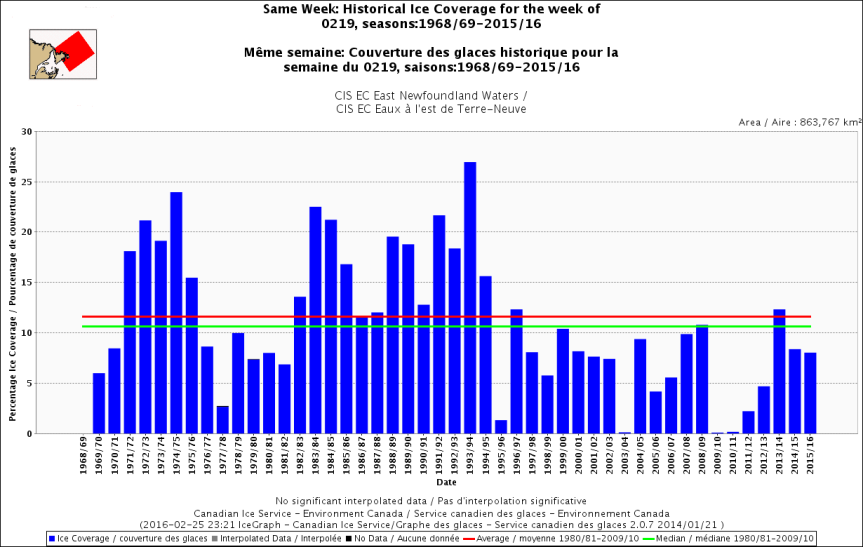 Sea ice coverage for Canada for the 25th of February 2016, courtesy the Canadian Ice Service:

It has been claimed that the early-2000s global warming slowdown or hiatus, characterized by a reduced rate of global surface warming, has been overstated, lacks sound scientific basis, or is unsupported by observations. The evidence presented here contradicts these claims. – Fyfe et al.