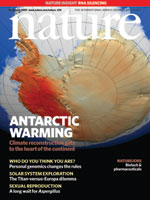 This is quite interesting. Remember the claim in on the front cover of Nature in 2009 by Steig and Mann that Antarctica was warming, thanks to that “special Mannian PCA math sauce” that was applied to air temperature data to smear surface temperature trends over the entire continent? It was dashed by climate skeptics who wrote a paper. It was accepted for publication and disproved (in my opinion) by a team of credible skeptics that wrote a counter-paper. But, there’s an interesting twist thanks to new and surprising data; Steig and Mann may have captured surface air temperature trends in the exact same areas that have been identified as geothermal hot spots.

First the press release, from the British Antarctic Survey on Nov 13th, 2017:

An international team of scientists, led by British Antarctic Survey (BAS), has produced a new…